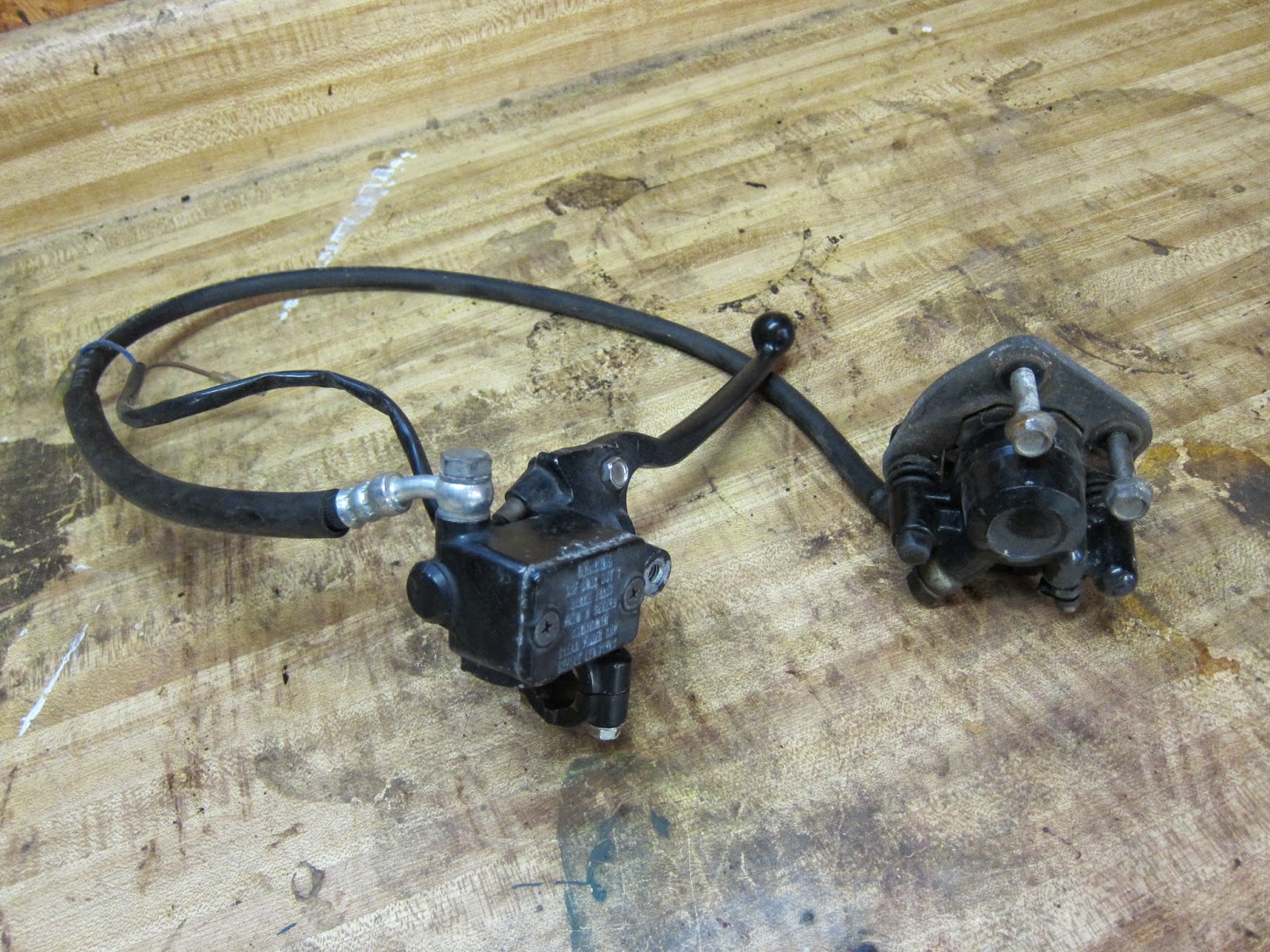 The AR's front brake worked when I broke the bike down, but it needed a bit of a refresh. 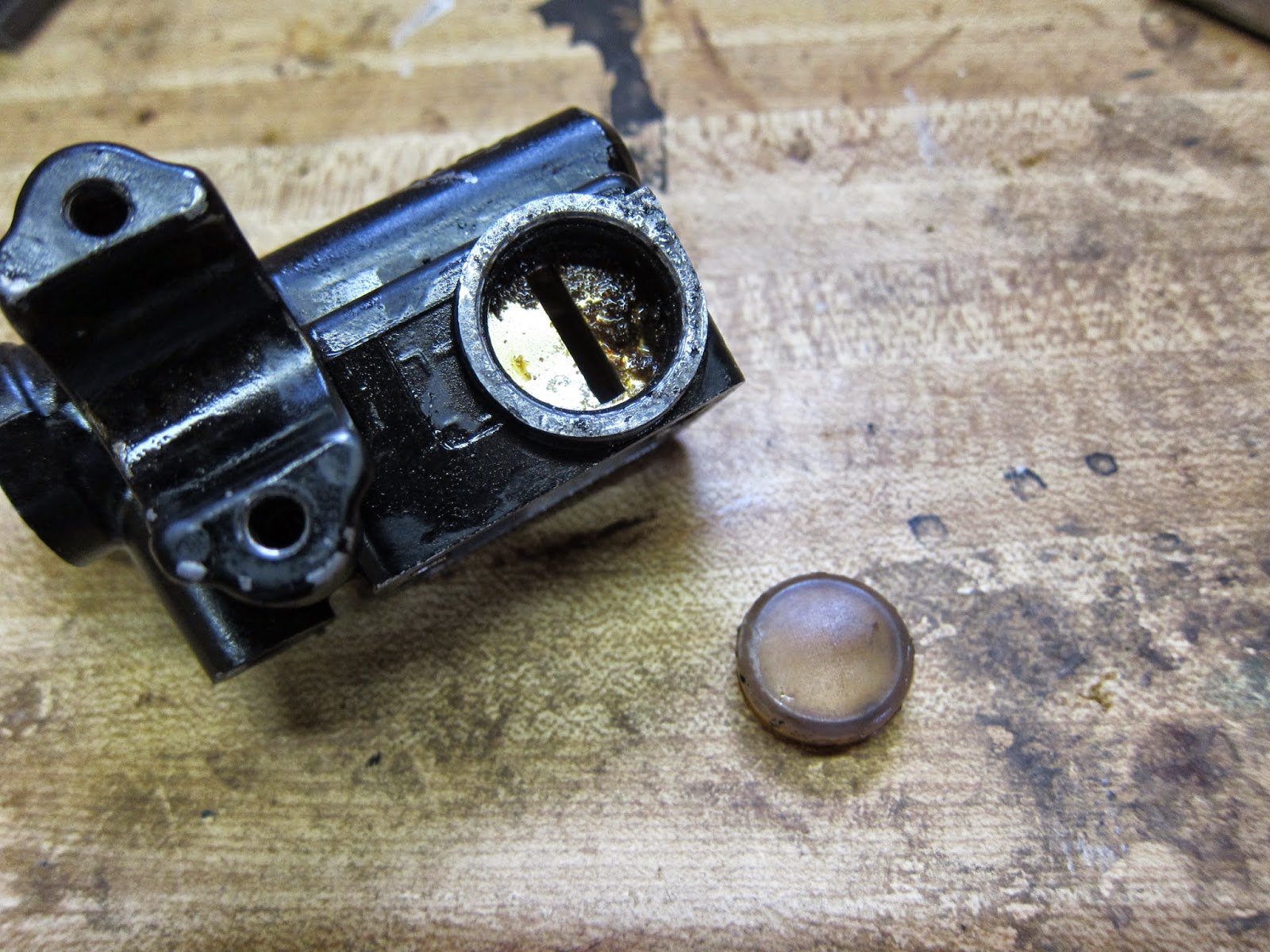 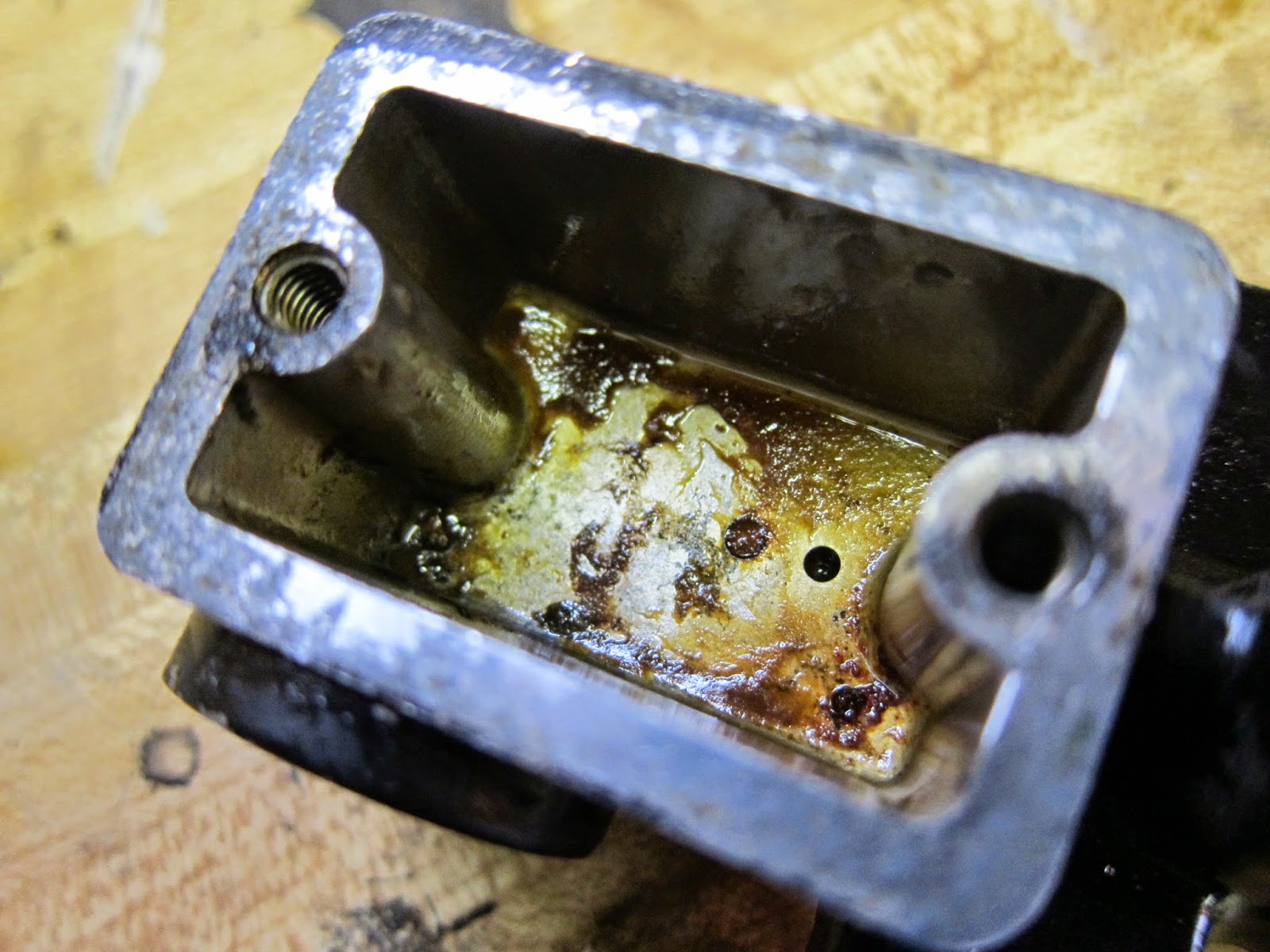 Step one was clean out the sludge that used to be the old brake fluid. 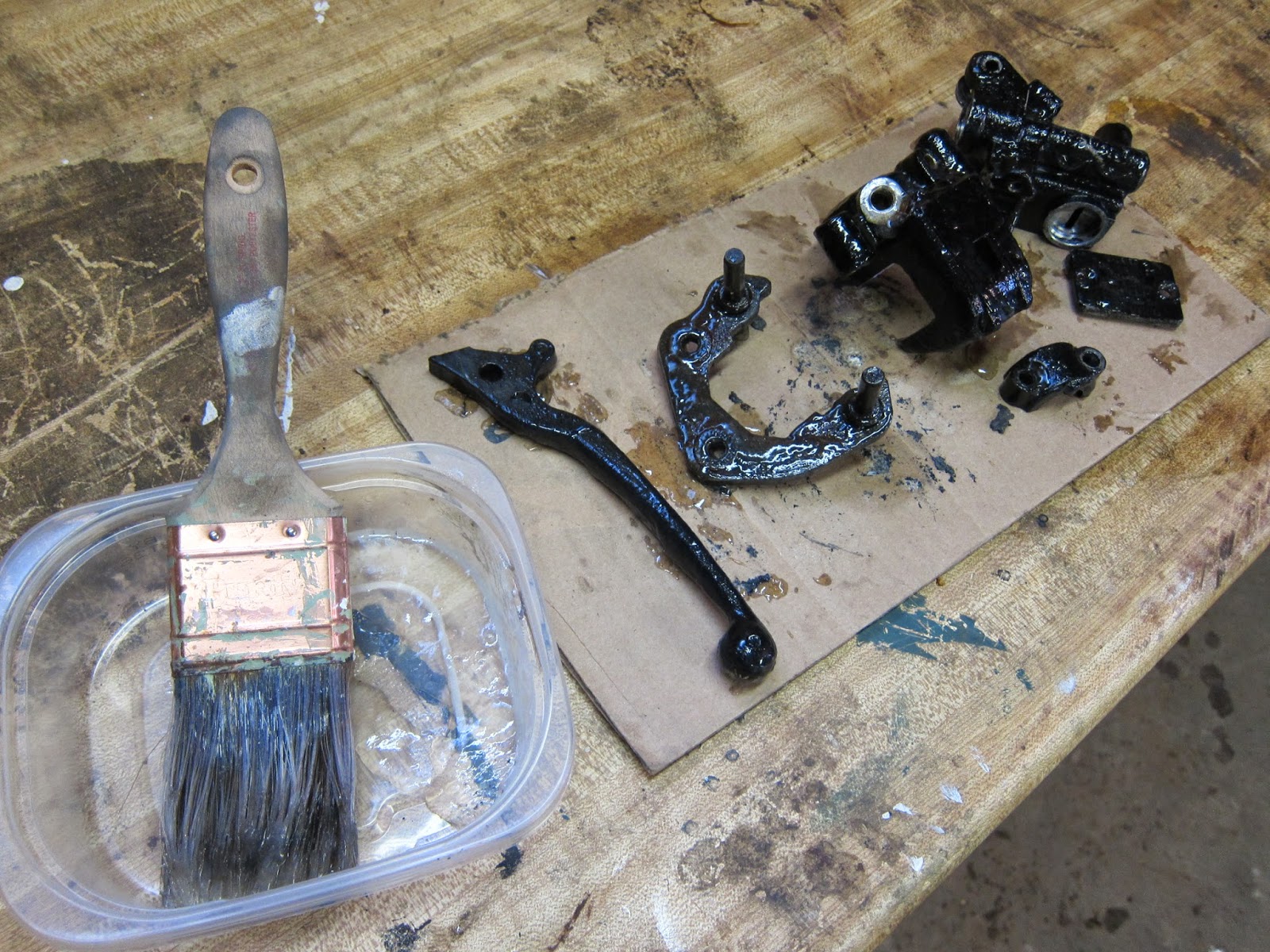 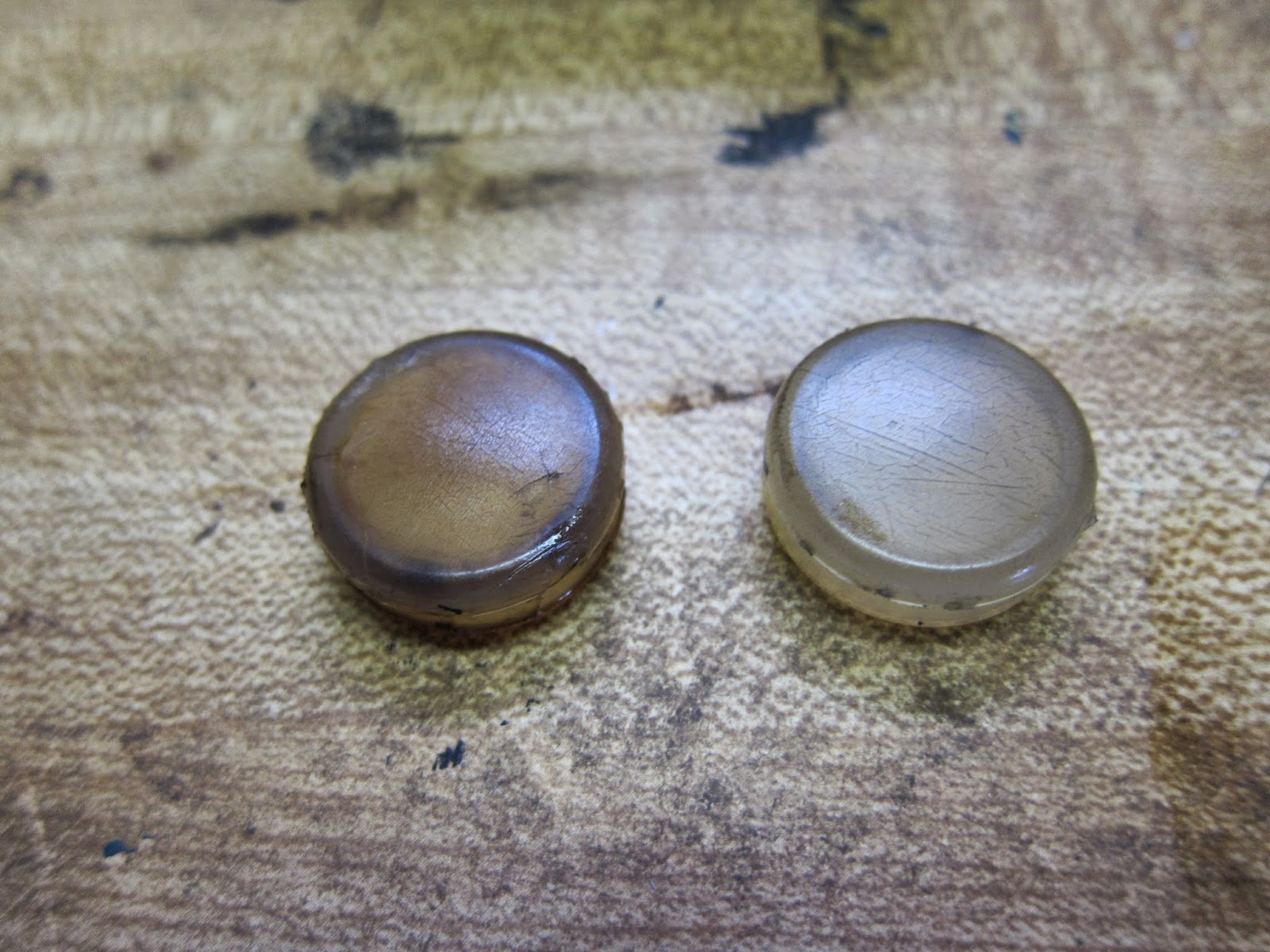 The reservoir window was seriously discolored.  Luckily the spare master cylinder that came with the bike had one that is still somewhat transparent. 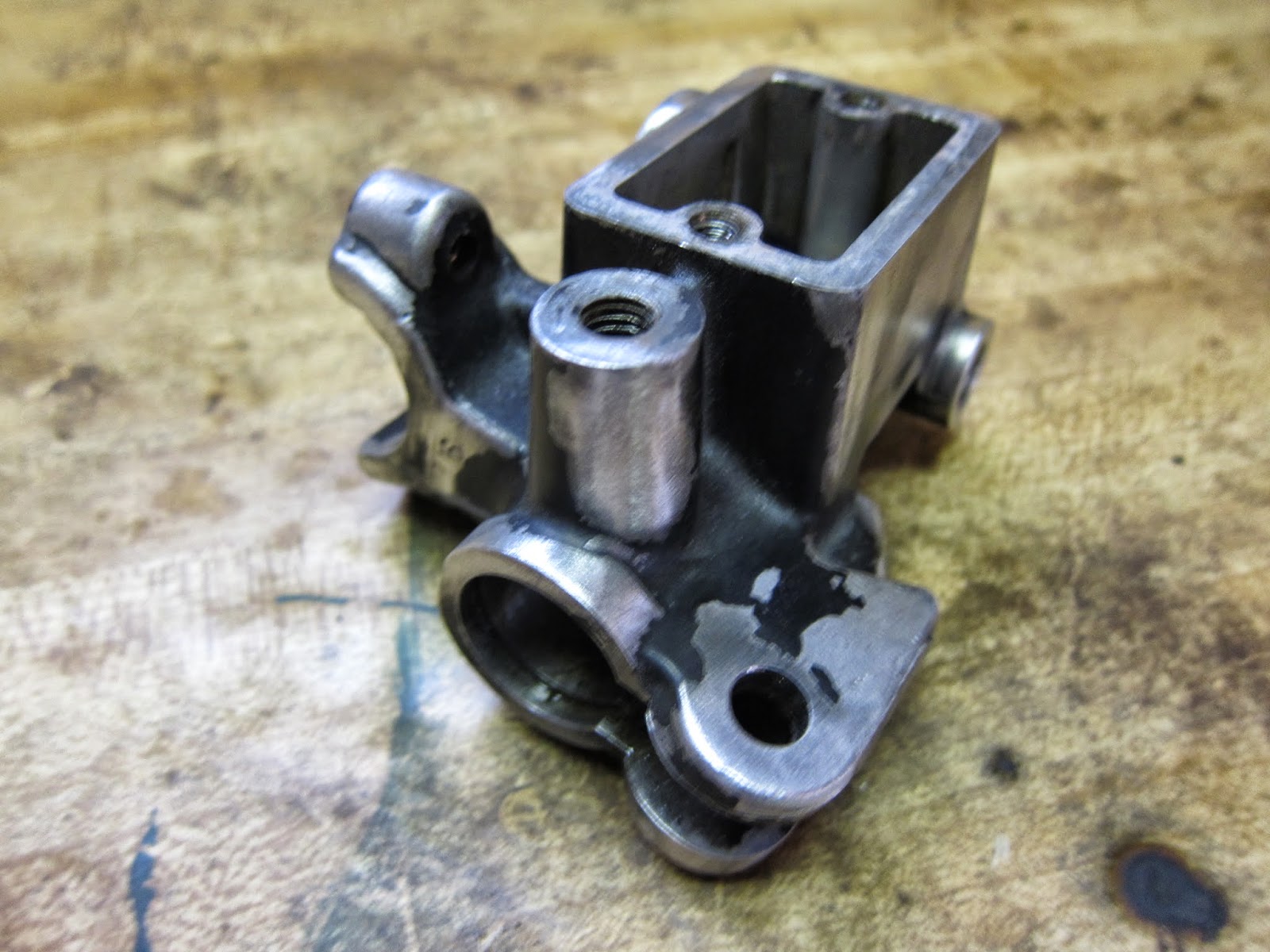 On the original bike the mirrors screw into posts on the front controls.  Since I won't be using the stock mirrors I decided to see if I could get rid of the post. 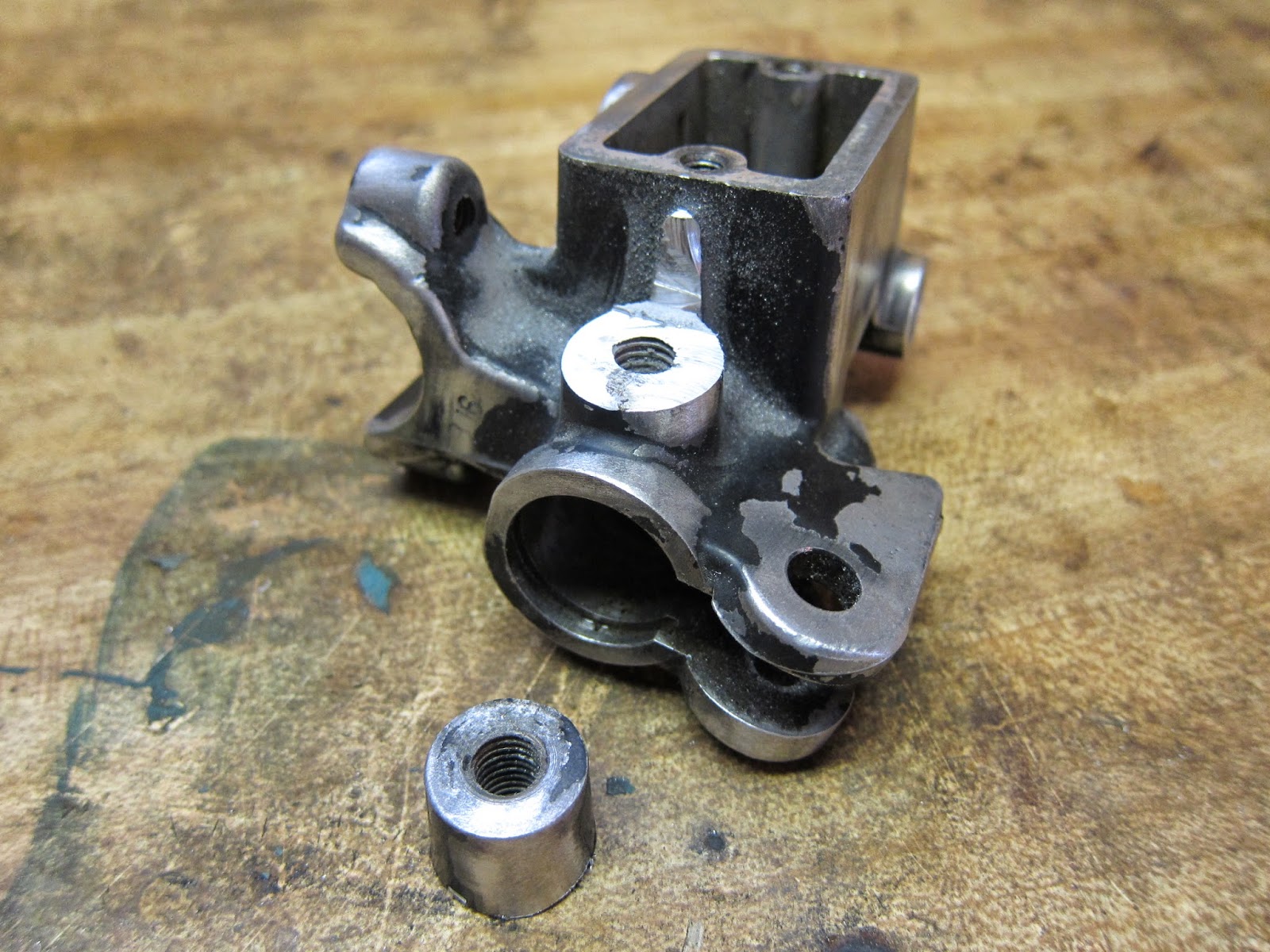 I cut most of it off with the Dremel and a cut off wheel. 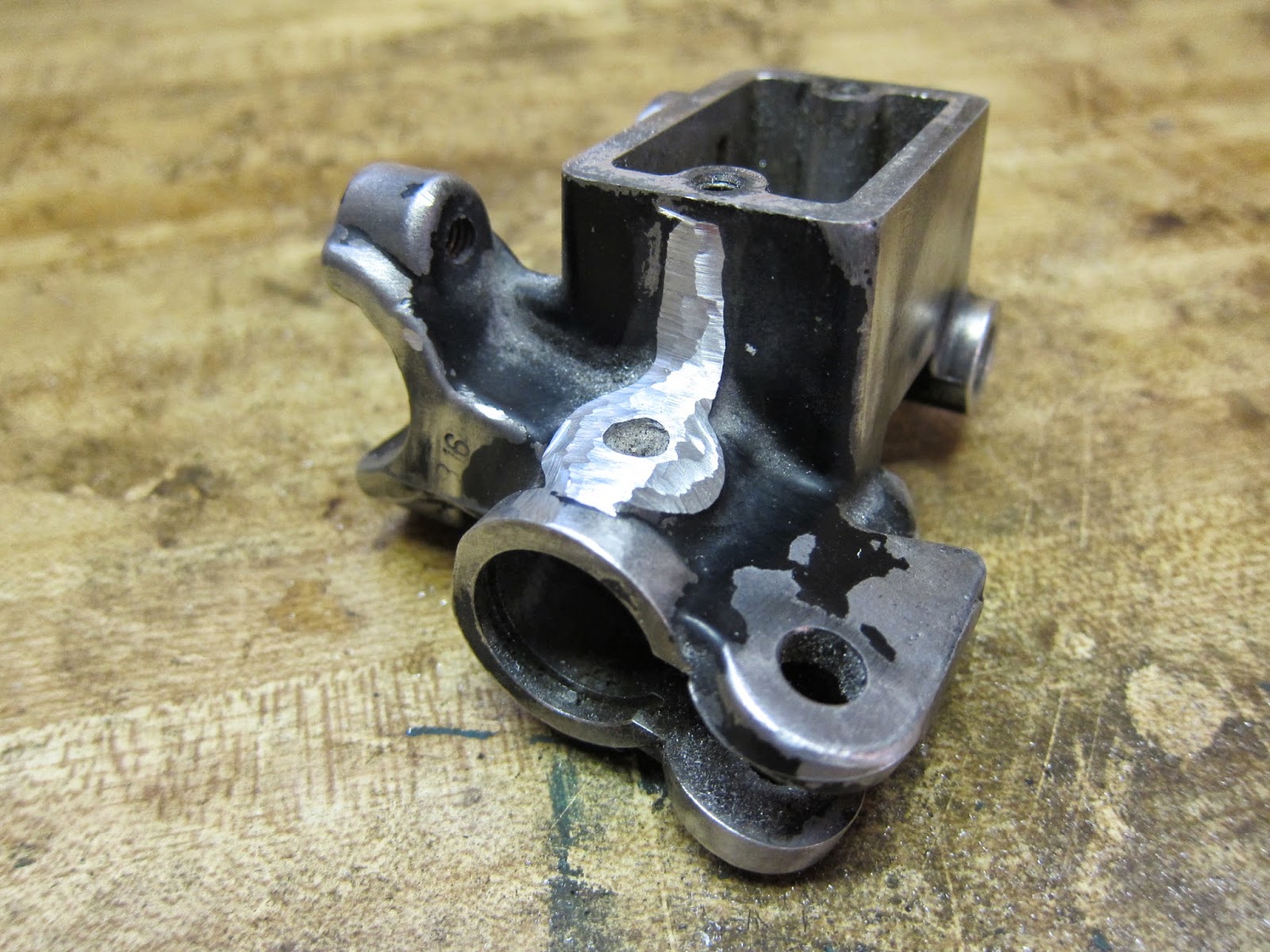 I used the benchtop grinder to remove as much material as I could and then switched to sanding drums on the Dremel when I needed finer control. 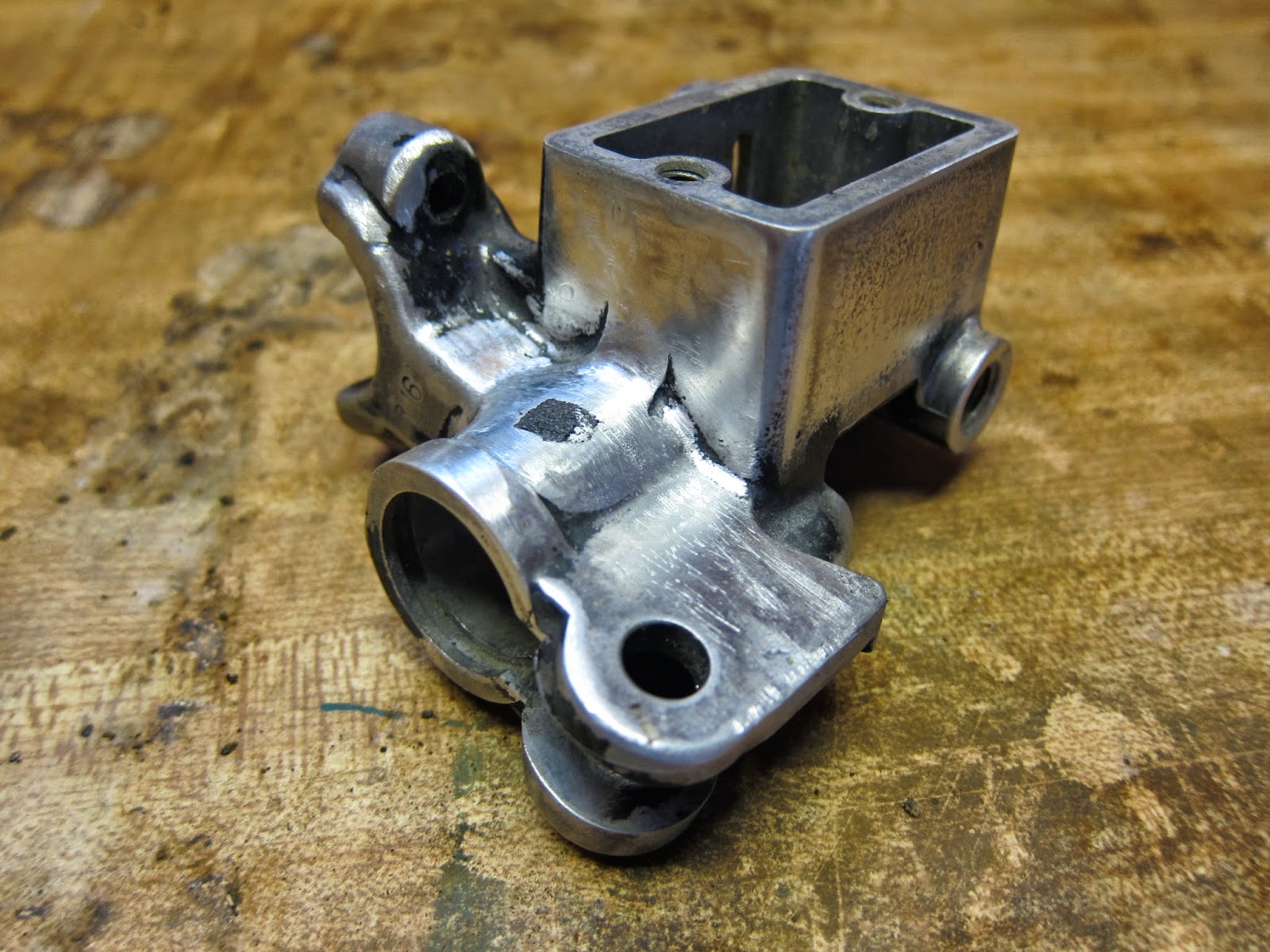 Finally I used a hand sander to get things as smooth as possible.  Unfortunately there was still a little bit of a divot where the mirror mount was.  Since I couldn't weld it (its aluminum) I decided to fill the divot with Quiksteel like I did on my top triple clamp (which was steel and could have been welded if I owned a welder at the time).  When I did the top triple I learned that the Quiksteel would expand in the oven, so I baked it and sanded it smooth again before powder coating it. 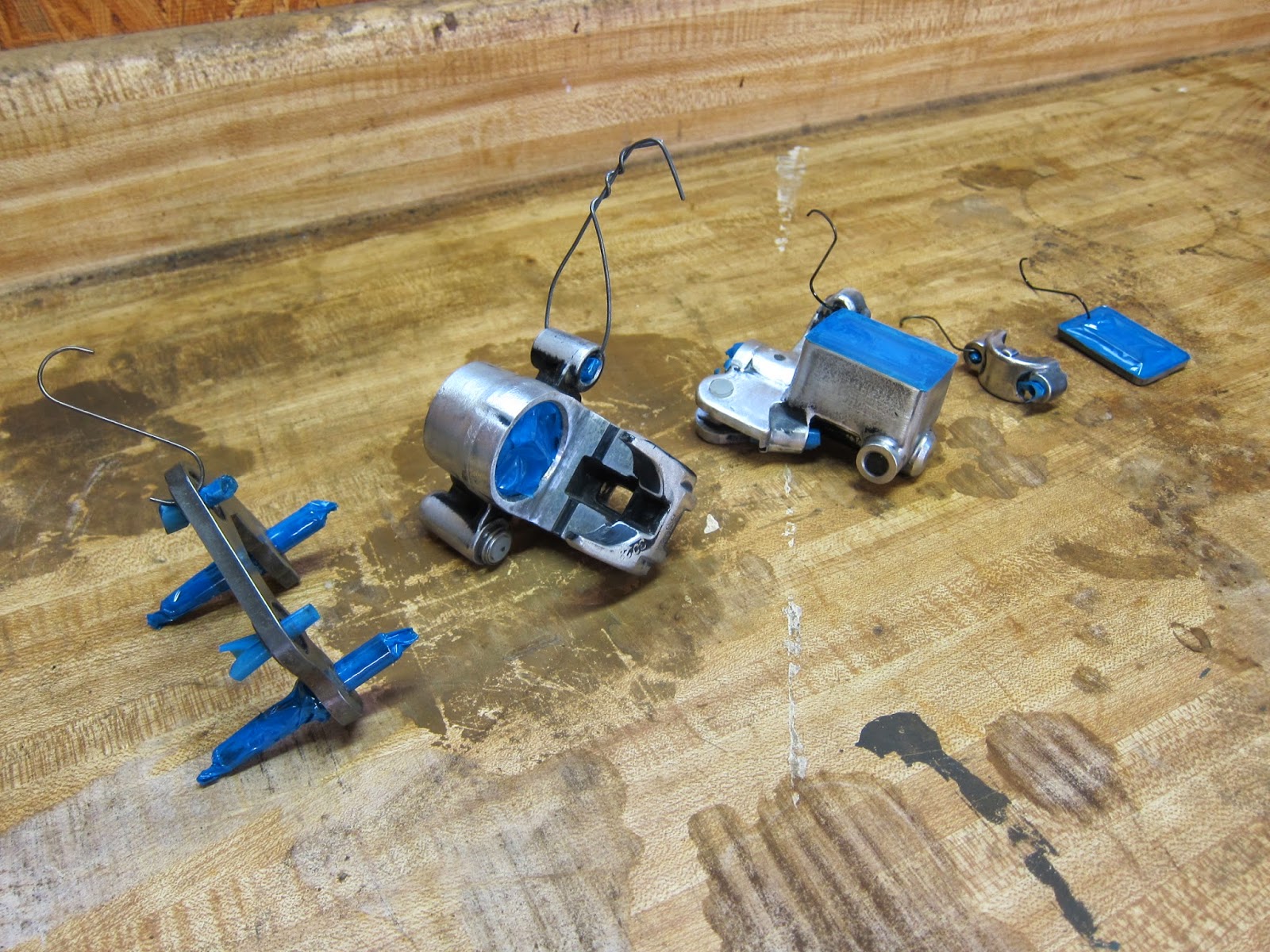 After things were stripped and sanded I masked them off to get ready for powder. 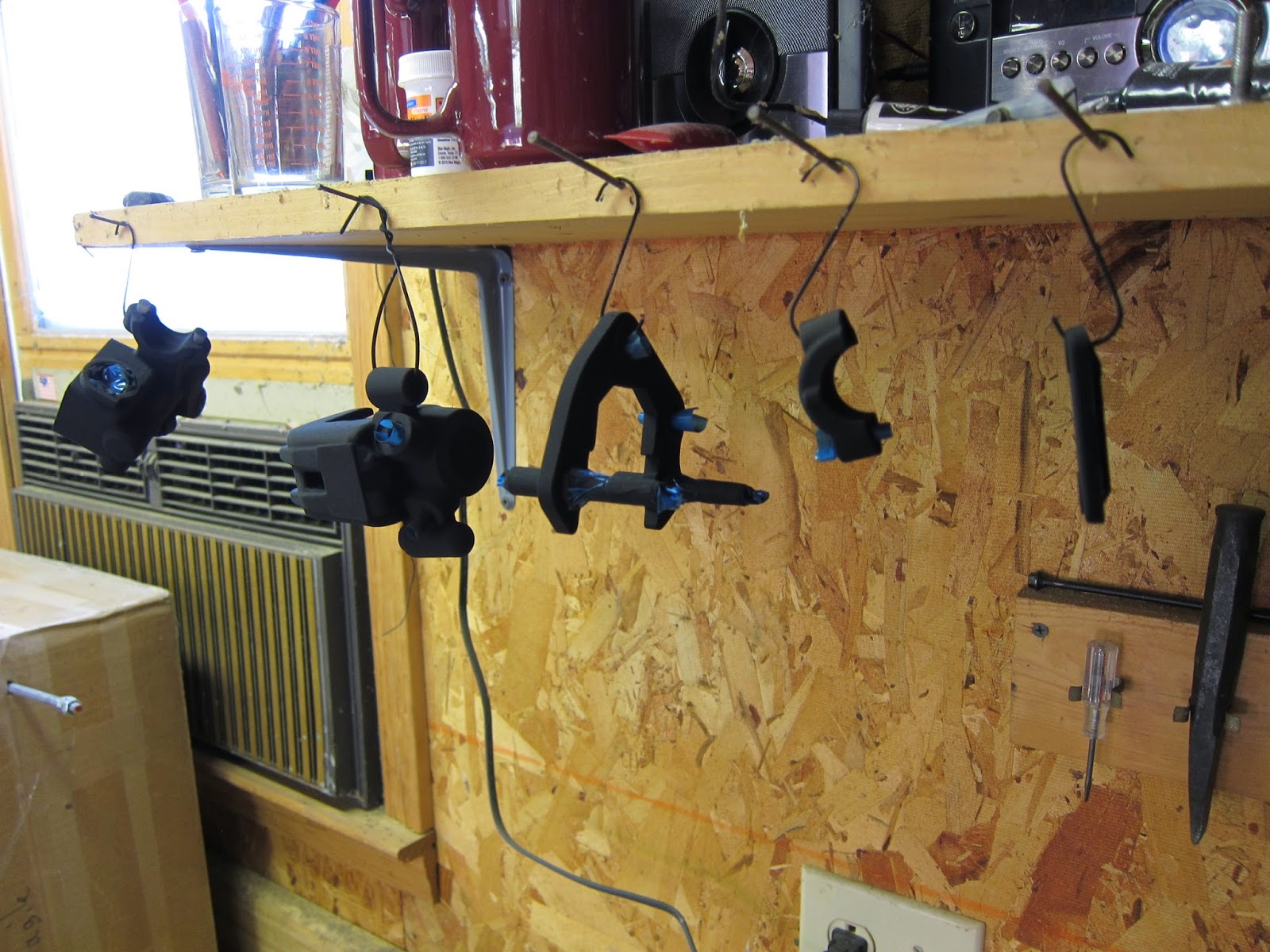 Here they are after powder, ready to go in the oven. 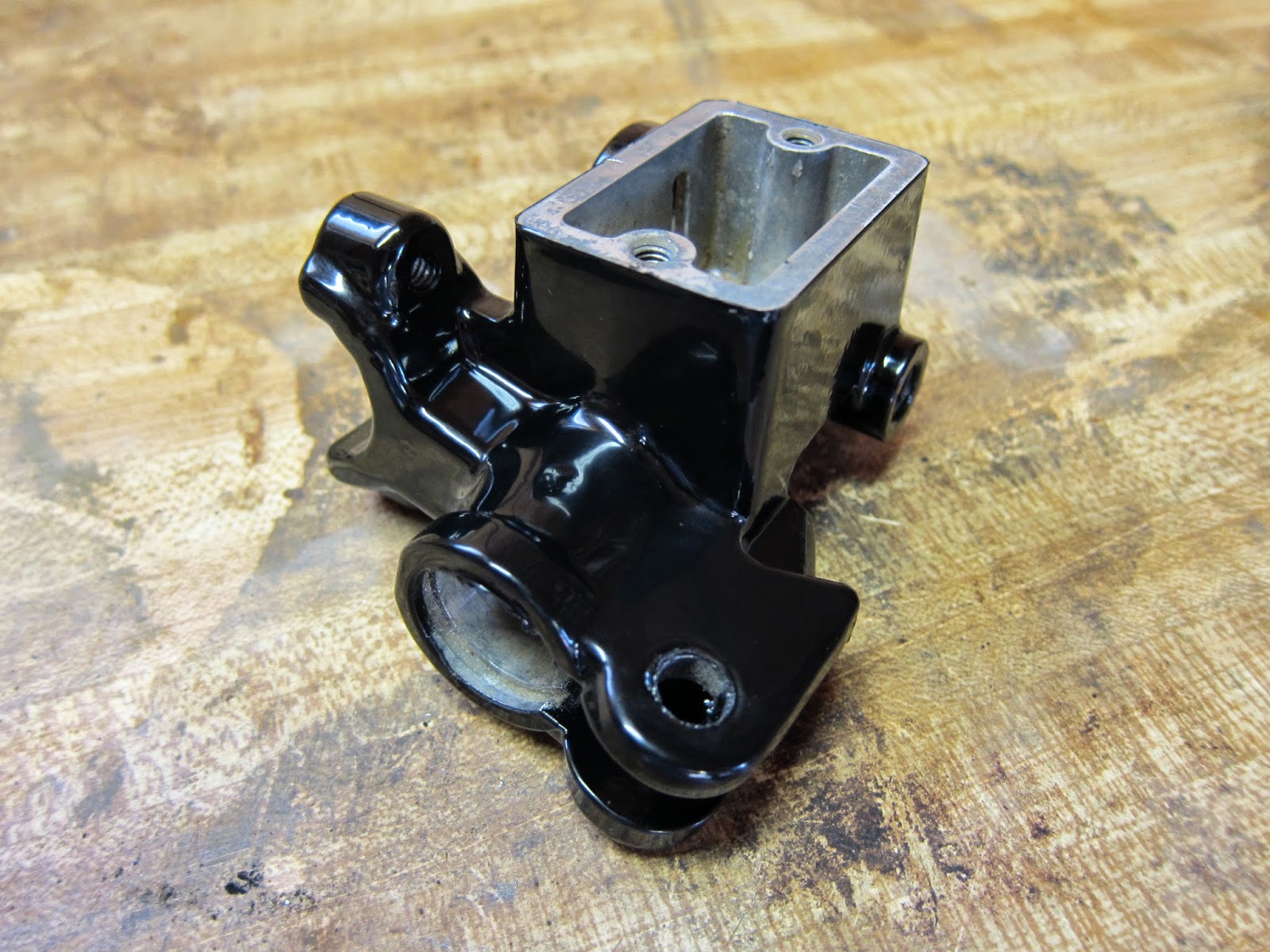 You can barely tell that there was ever a mirror mount on there.  Just a little dimple. 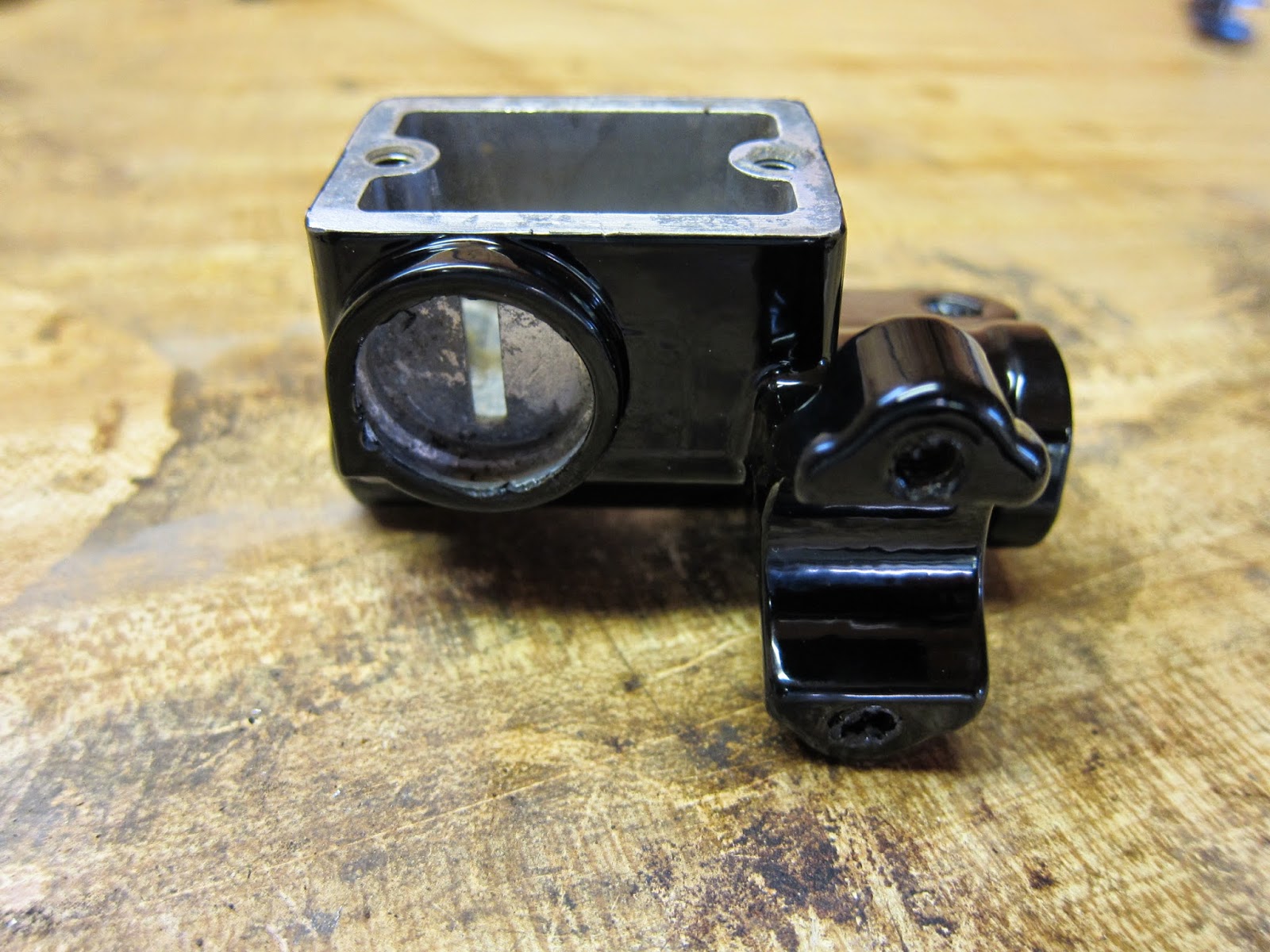 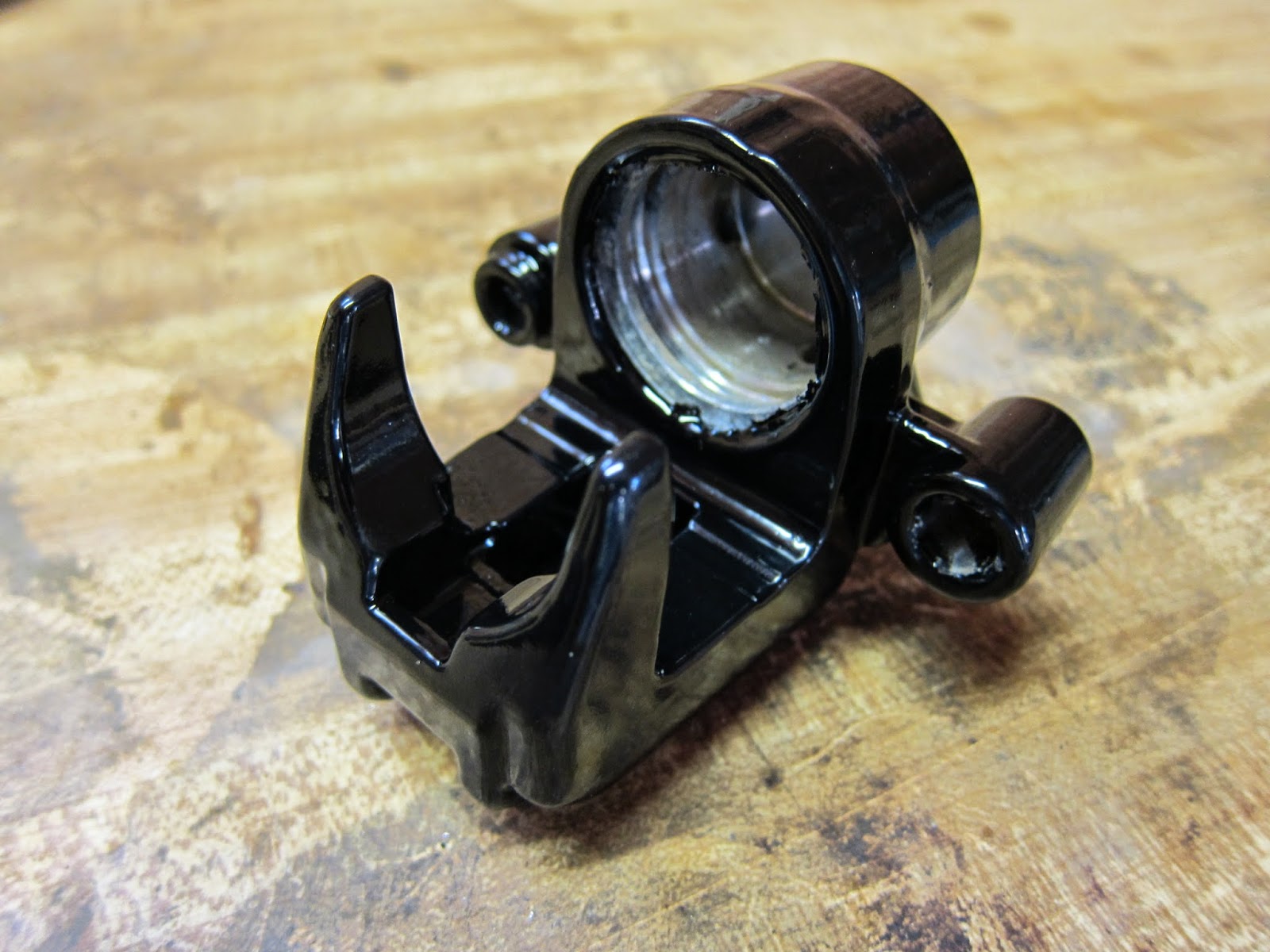 I did two layers of powder on all the parts.  They came out nice and smooth. 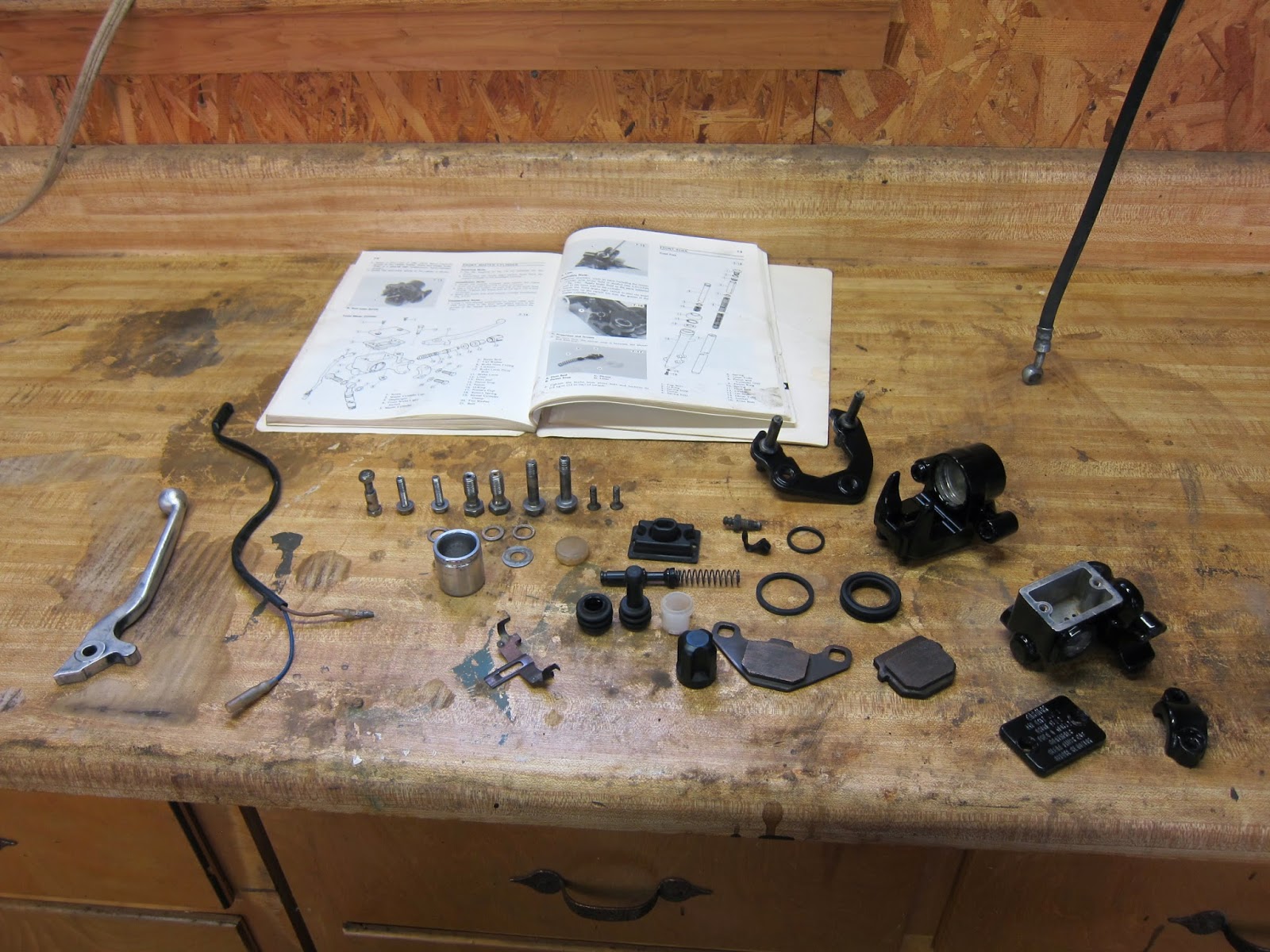 For reassembly I consulted my trusty service manual. 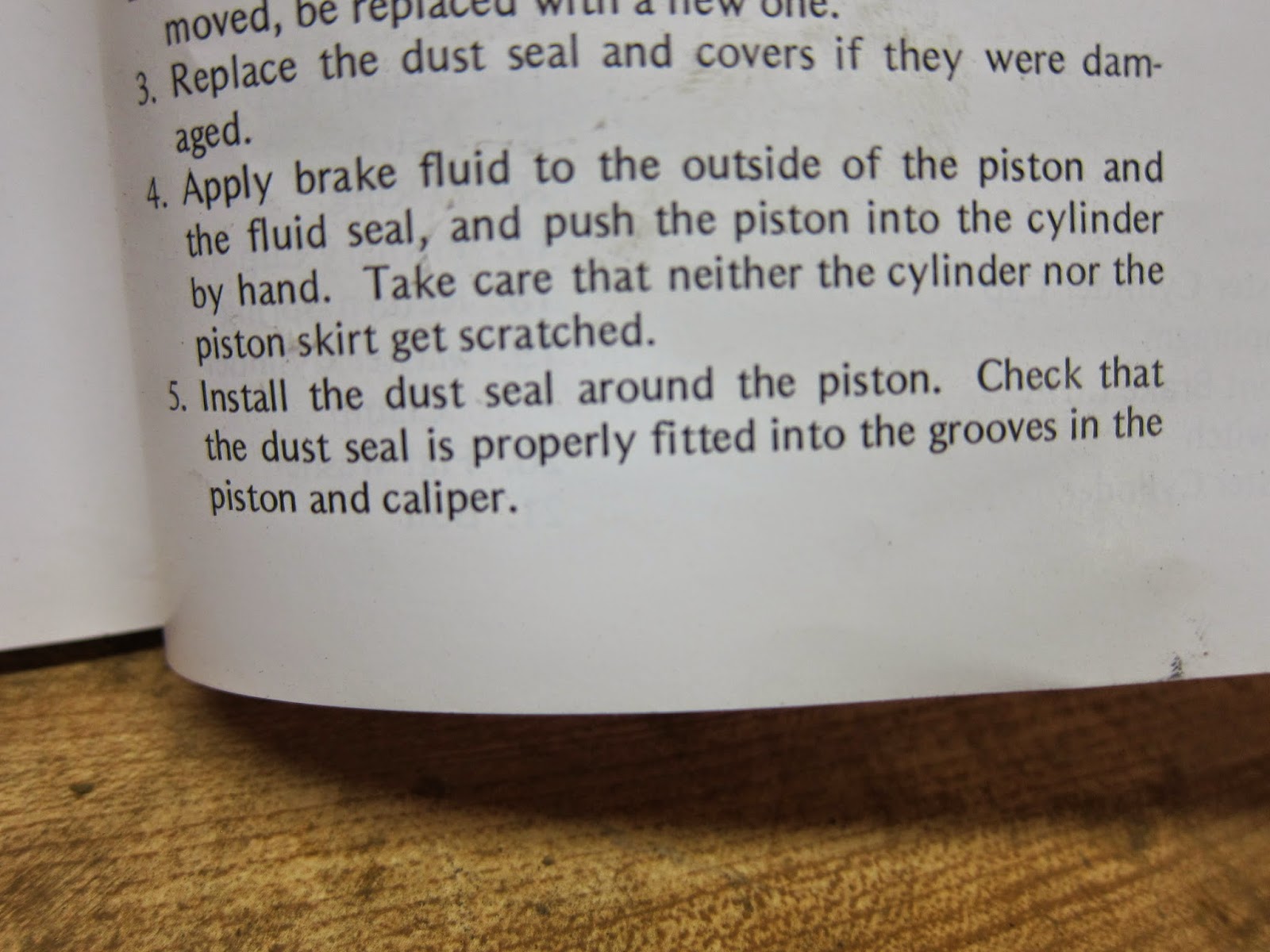 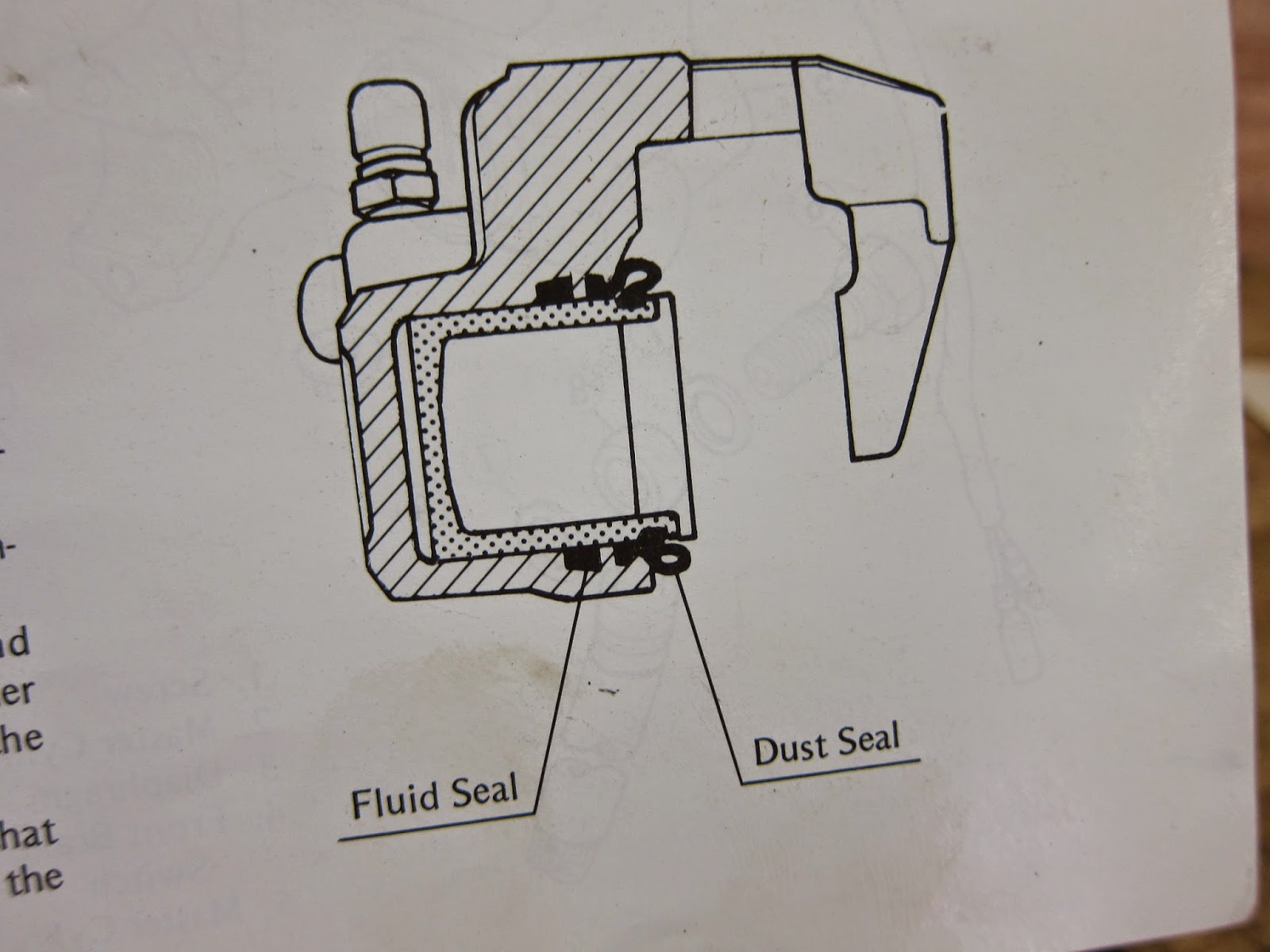 Step five of the reassembly instructions for the caliper reads:

While that sounds simple enough, it might as well say:


Construct a rocket ship out of cardboard and fly to the moon.

Getting that stupid dust seal in there is the reason why so much time has passed since my last update.  I tried it multiple times with no success.  Finally today I had the right combination of patience and luck to make it work.  Part of the trick was applying a bit of brake fluid to the seal to get it to slip in place.  I put the seal into its groove on the piston and pushed it into the caliper.  Then I worked my way around the seal using a small screwdriver to push the seal down into its groove in the caliper. 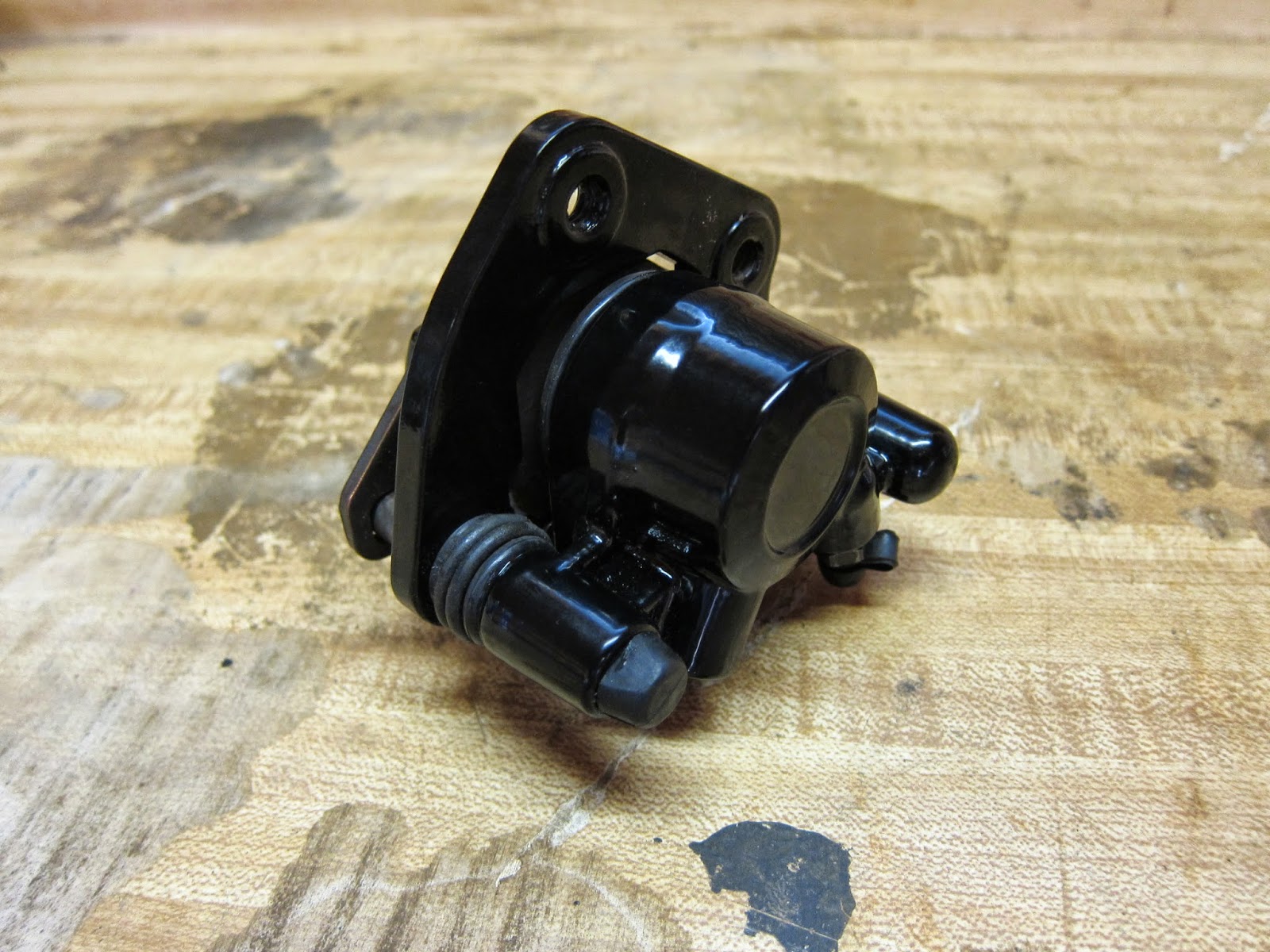 Here is the caliper fully assembled. 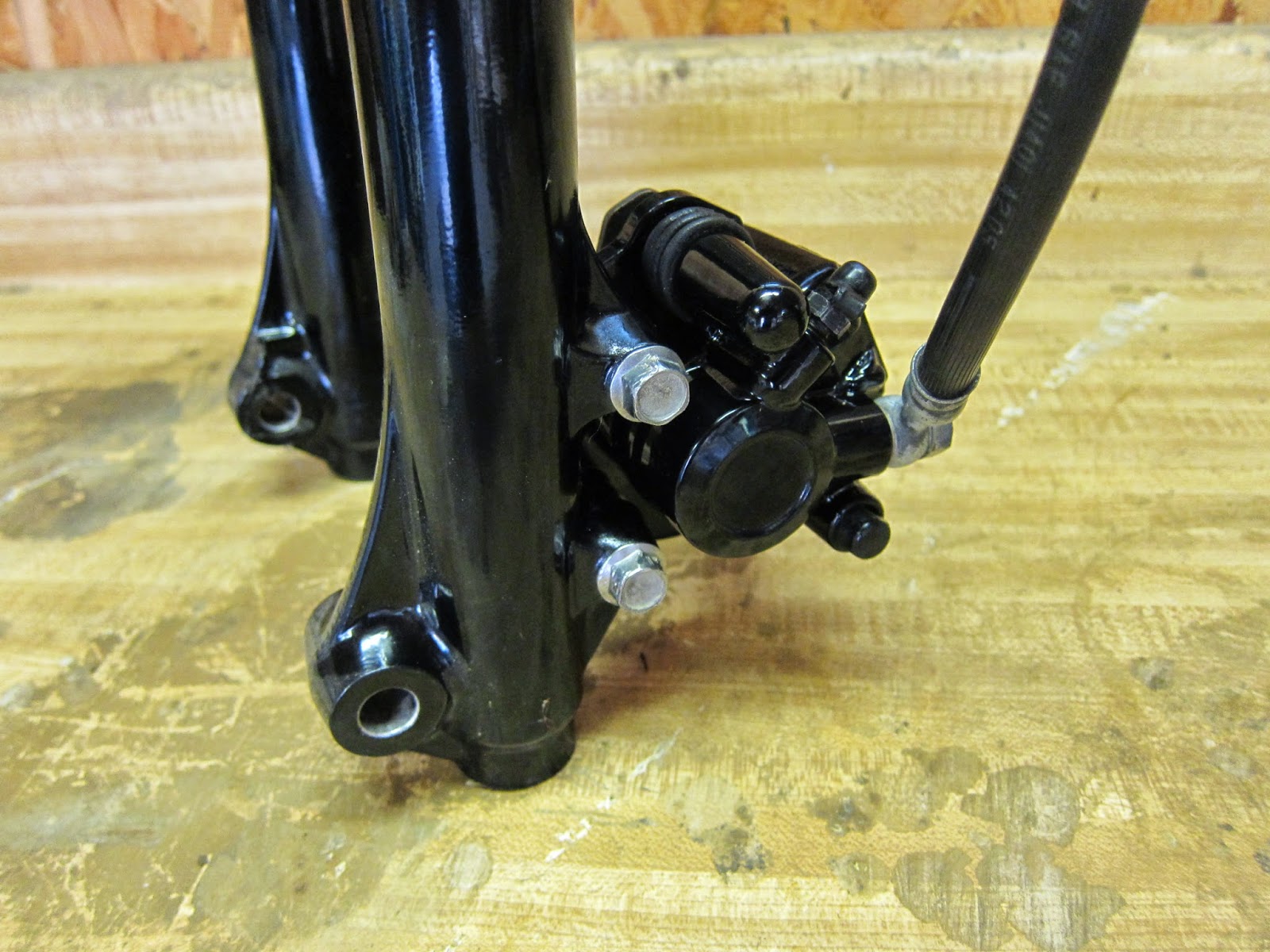 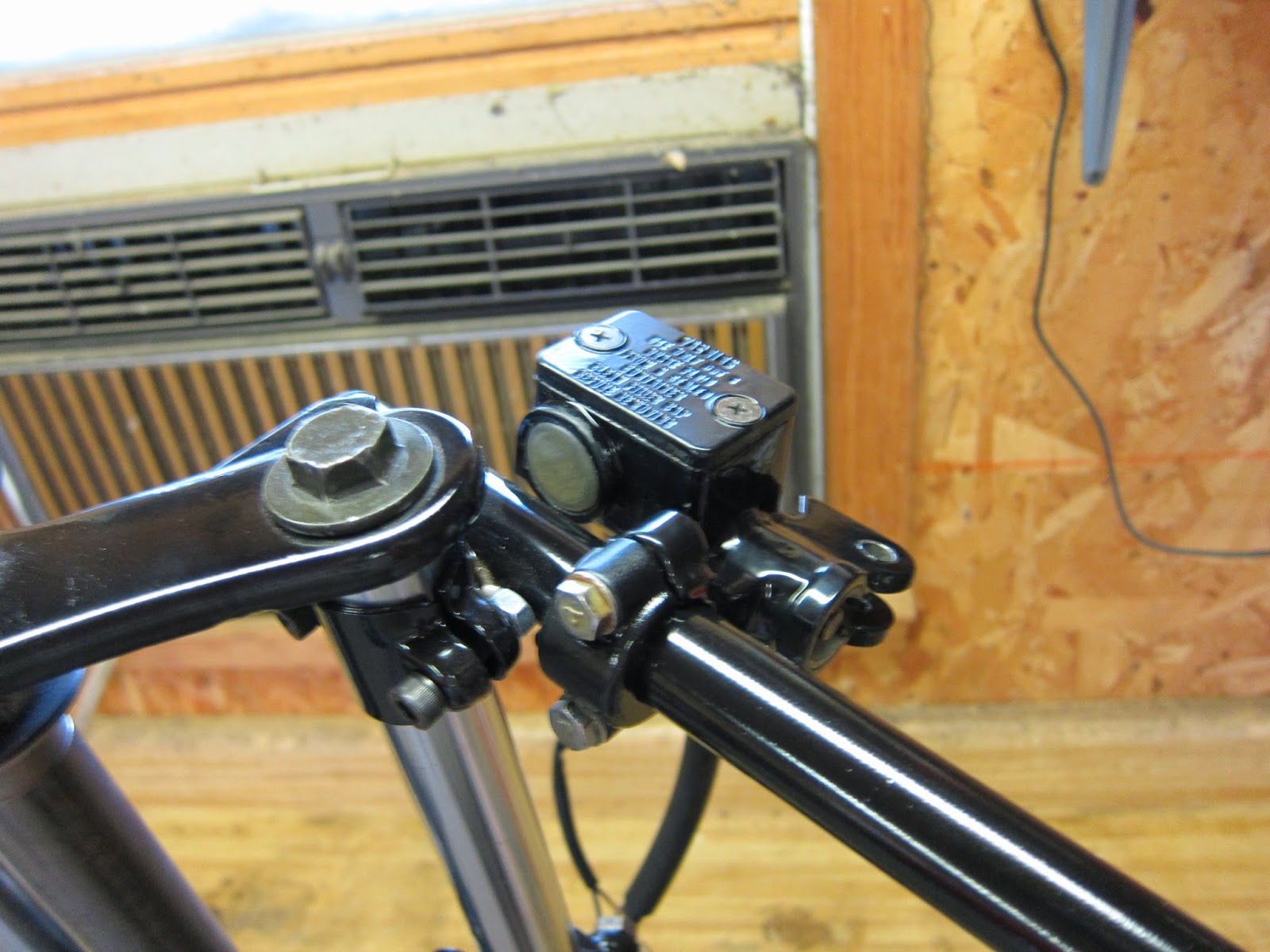 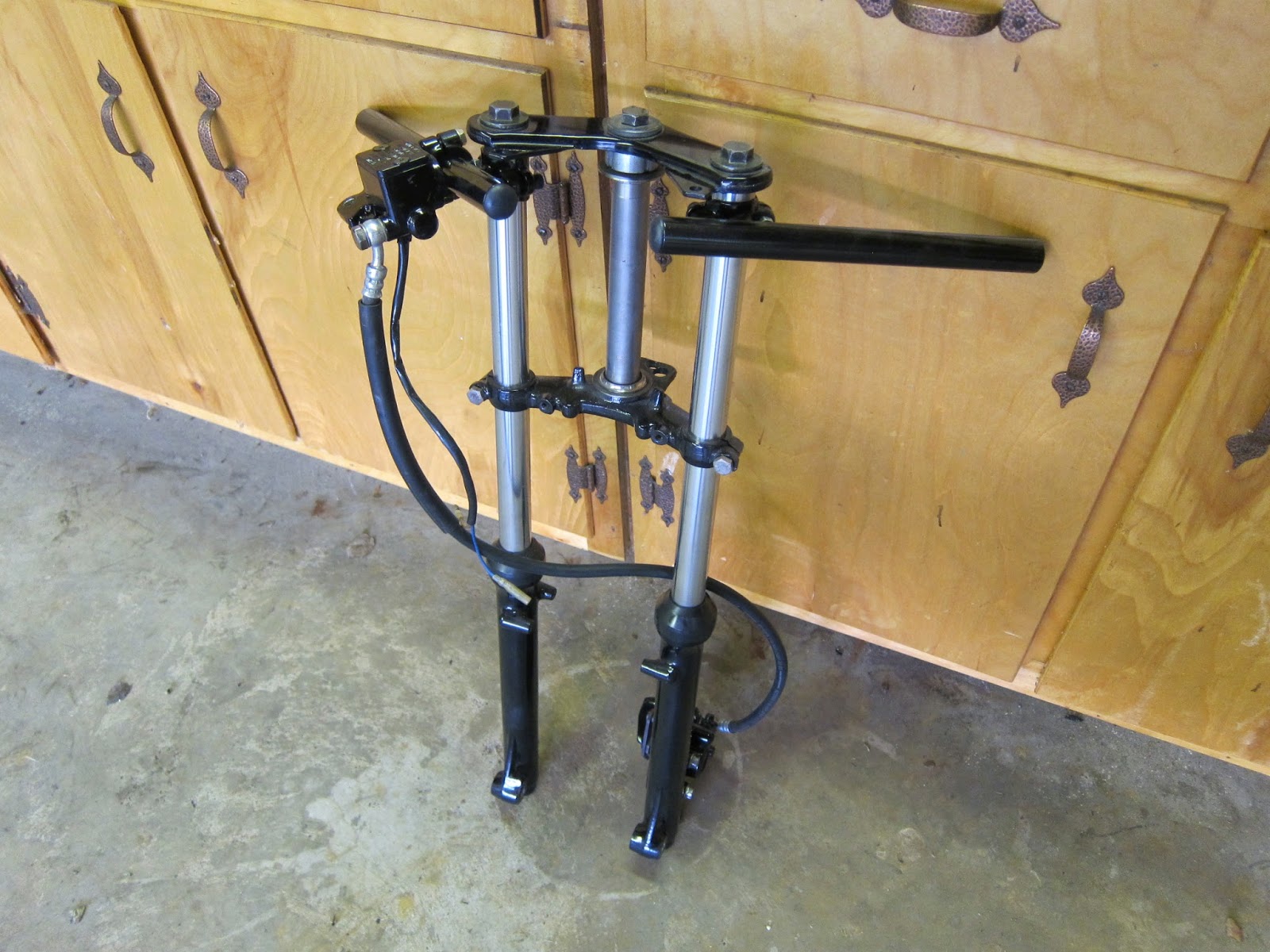 When the caliper and master cylinder were done I installed them on my front end assembly.  That way it'll be ready to go when its time to reassemble the bike.  If I keep up my blistering pace that should be midsummer of 2020.
at 6/15/2014 10:48:00 PM