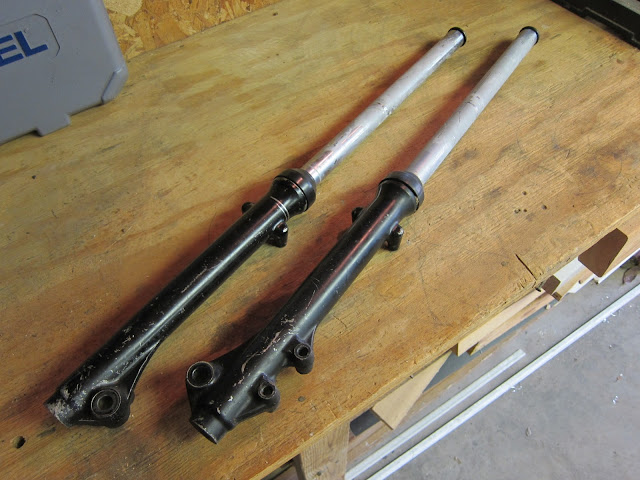 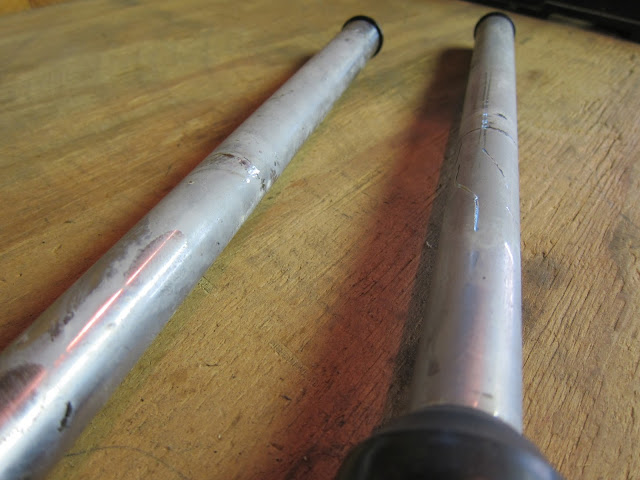 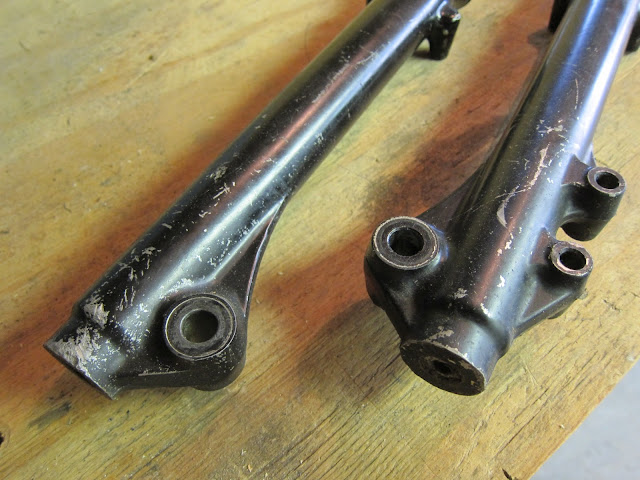 The front forks on the AR were looking pretty tired, so I decided to rebuild them.  When I took the bike apart and set the forks aside I applied a coat of Krud Kutter to the uppers because they had some scratches that had begun to rust.  The mottled look of the uppers is from the dried Krud Kutter.  It did a great job of getting rid of the light rust though. 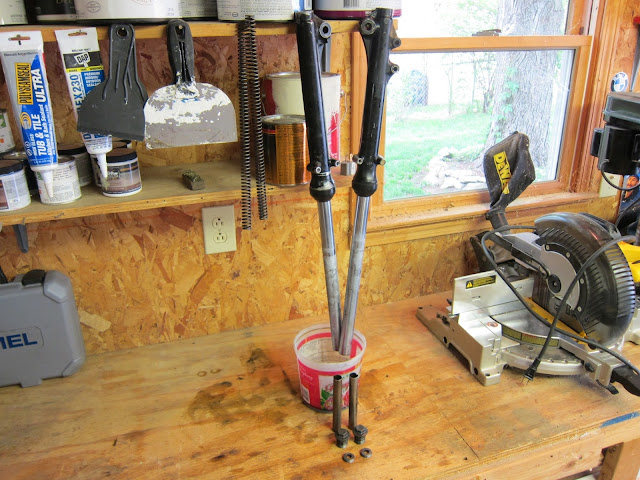 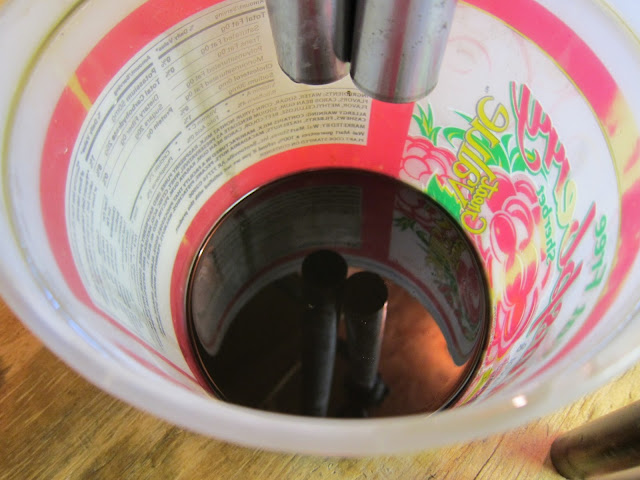 First, I removed the top caps and emptied out the old fork oil.  I don't know what color it was when it went in, but it came out a dark and nasty brown.  It also stunk to high heaven. 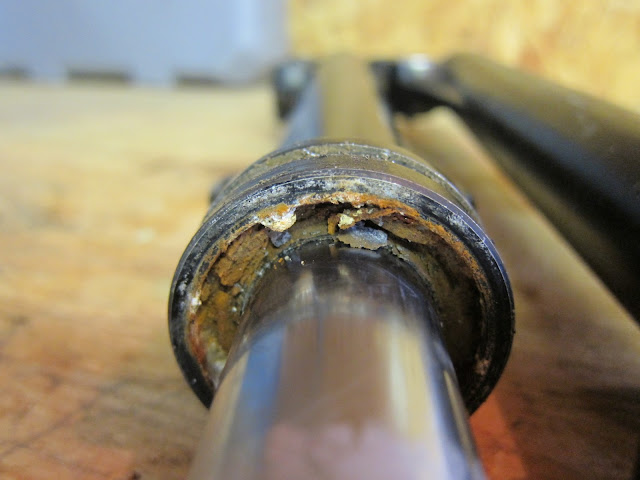 The oil seals were actually in decent shape but a ton of dirt and grime had gotten under the dust seals. 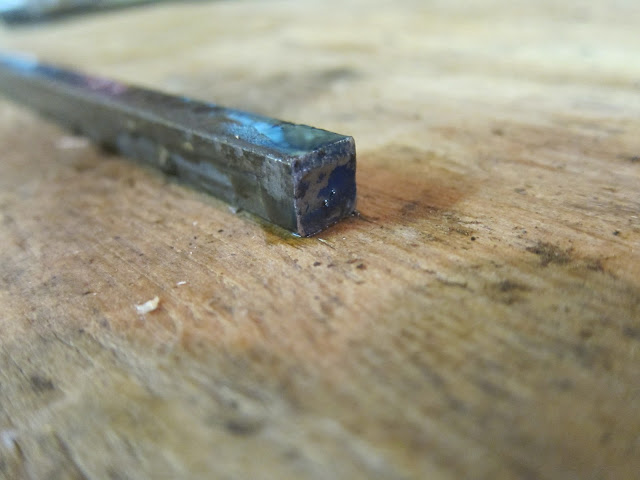 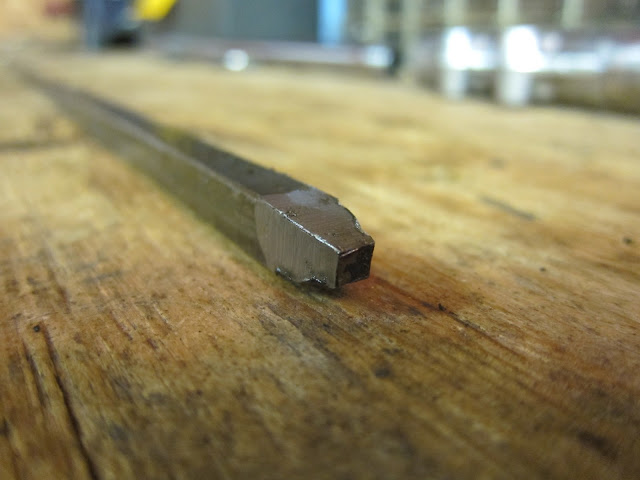 According to my service manual a special tool is required to disassemble the forks.  This tool is basically a long shaft with a T-handle and a tapered square end.  Since I didn't have this special tool I got a 3/8" square rod and ground down the end to a point.  I actually ended up grinding it "sharper" than in this picture. 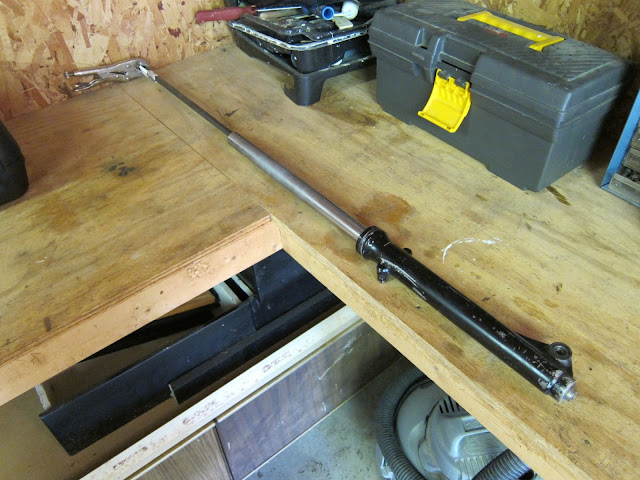 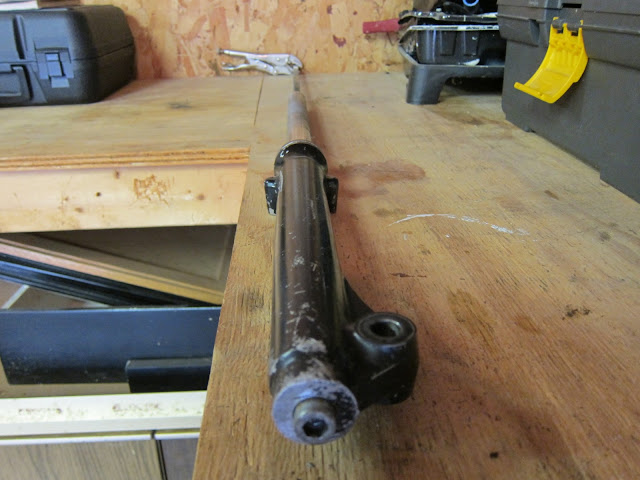 The tapered end gets jammed into the top of the "piston and cylinder unit" down inside the fork so you have something to hold onto while you loosen the Allen bolt on the bottom of the fork.  I had good luck with the first fork by pressing the rod end hard against the wall while I loosened the bolt with an Allen wrench.  The second fork decided to be difficult. 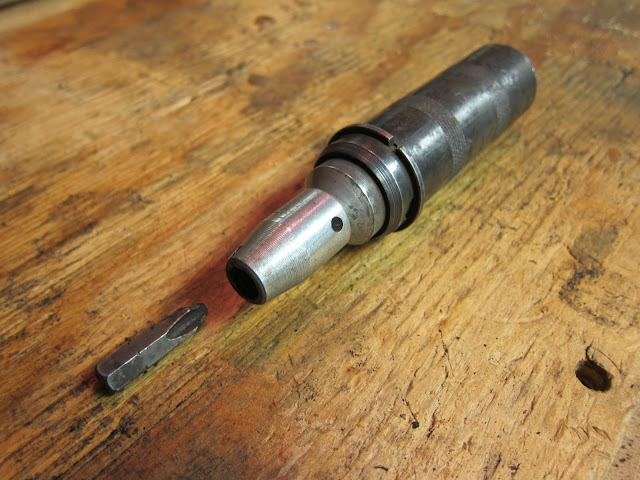 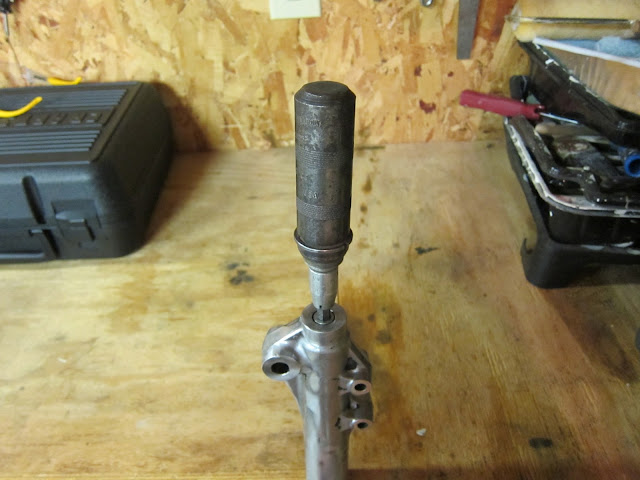 For the second fork I had to use my hand impact driver.  This neat little tool is for removing stubborn bolts and screws.  You hold onto the outer sleeve and hit the top of it with a hammer.  The inner core has a bit on the end and is splined such that the impact force is transferred in a downward and counterclockwise motion simultaneously.  This impact force is more than can be generated by a constant force from turning an Allen wrench.  It took a bit of hammering but I broke it loose.  I learned later that applying some heat would have been a good idea.  What a n00b. 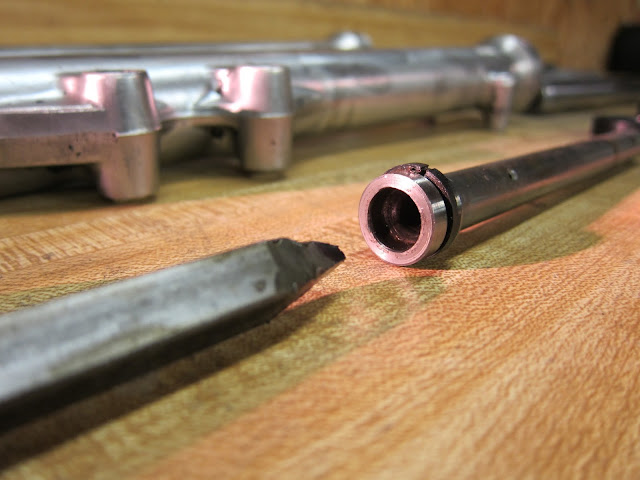 With the fork disassembled you can see the cup at the top of the "piston and cylinder unit" that the special tool gets jammed into.  Evidently a lot of forks work this way.  I don't know why they wouldn't put at hex head down there instead. 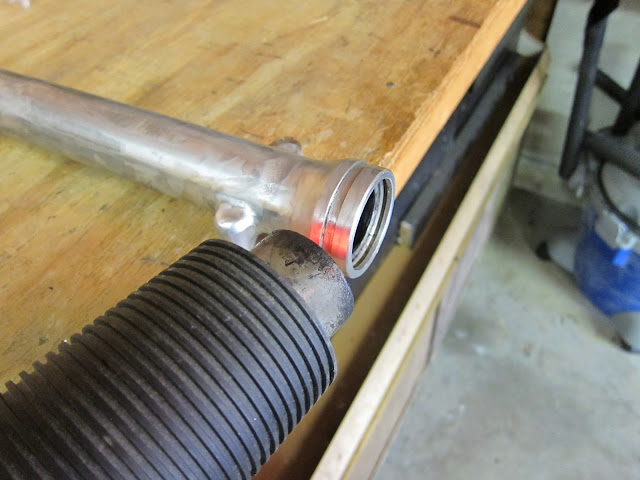 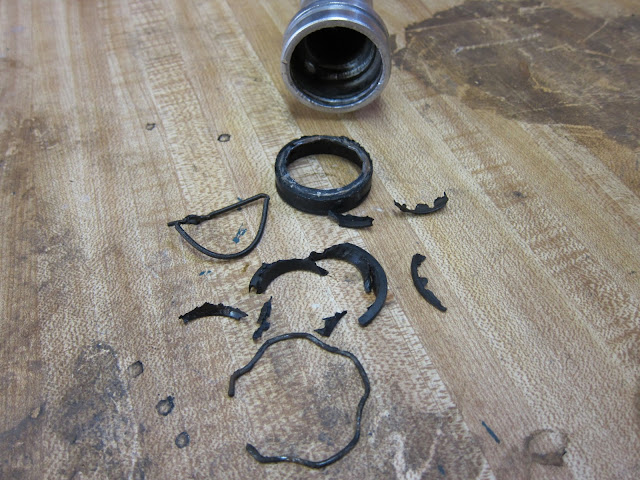 To get the old oil seals out of the lowers I had to apply a bit of heat with a heat gun.  I was then able to pry them out with a screwdriver.  In a bunch of pieces. 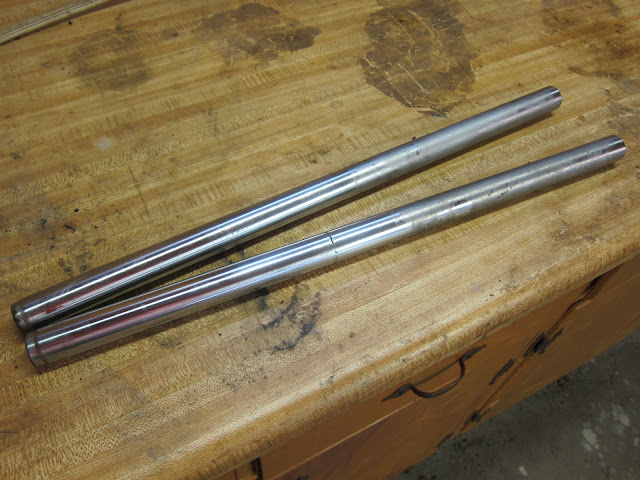 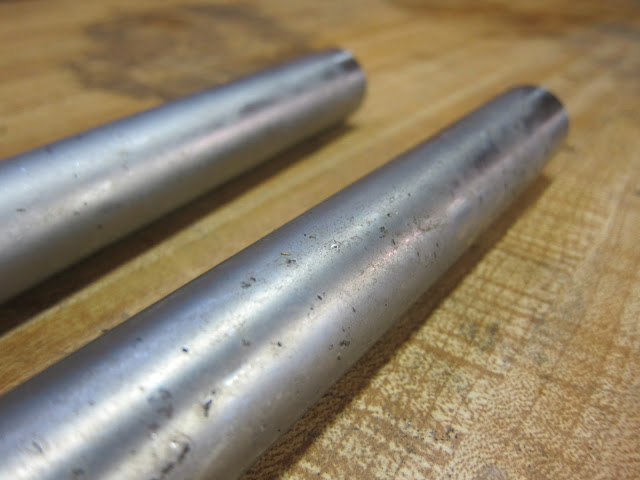 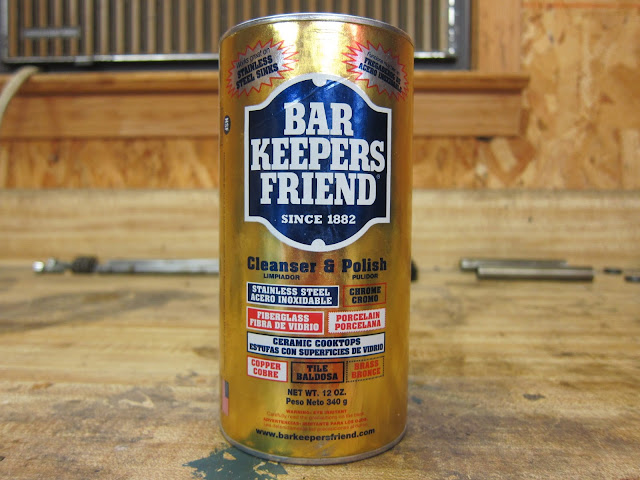 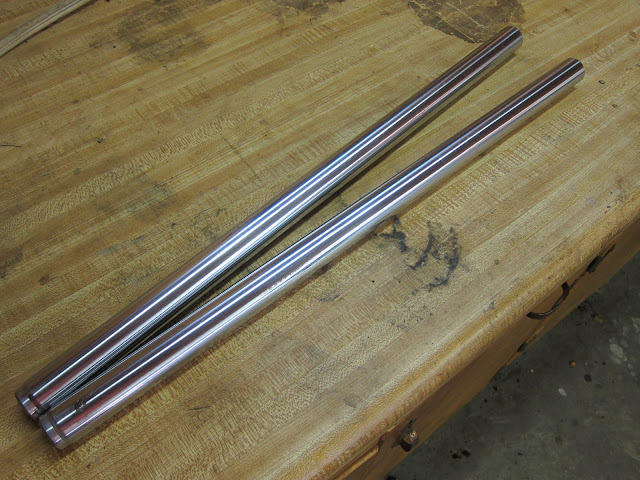 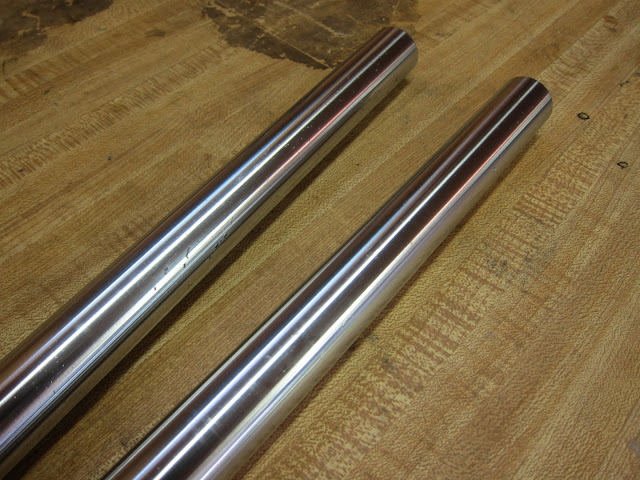 Accept for a few scratches the uppers were actually in pretty good shape so I decided to clean them up a bit and go with them.  I got them damp, shook on some Bar Keeper's Best Friend and gave them a light scrubbing.  Not bad. 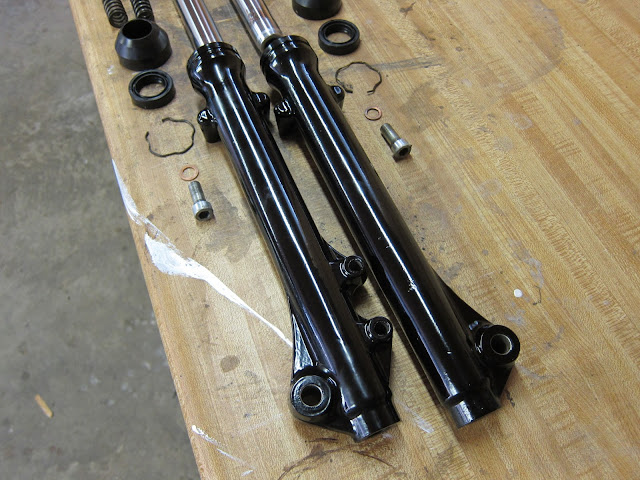 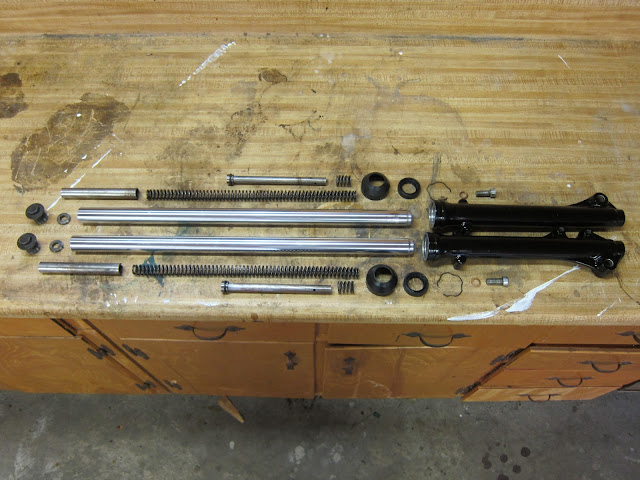 After stripping and powder coating the lowers I was ready for reassembly. 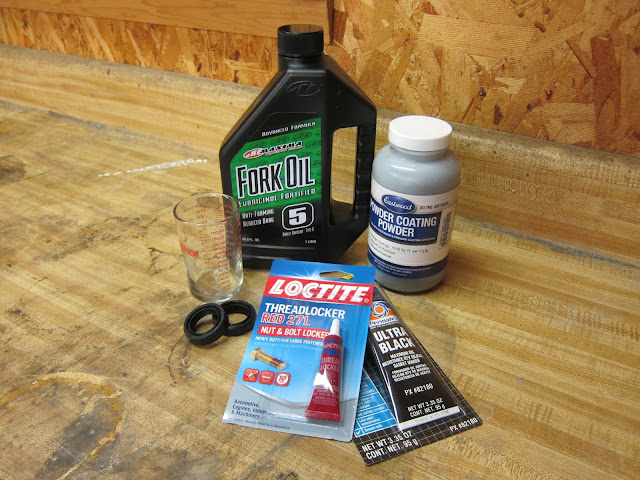 I ordered some new oil seals off of ebay.  The rest came from a local shop:  New 5w fork oil, Loctite for the bottom Allen bolt, and liquid gasket for the bottom gasket.

Note to the world:  Use the liquid gasket liberally.  I assembled the forks a couple of times only to have the new oil leak out of the bottom.  That is not especially fun after you've applied Loctite to the bolt and left it to set up.  I had to heat up the bolt with a propane torch and then whack it with the impact driver to get it out again. 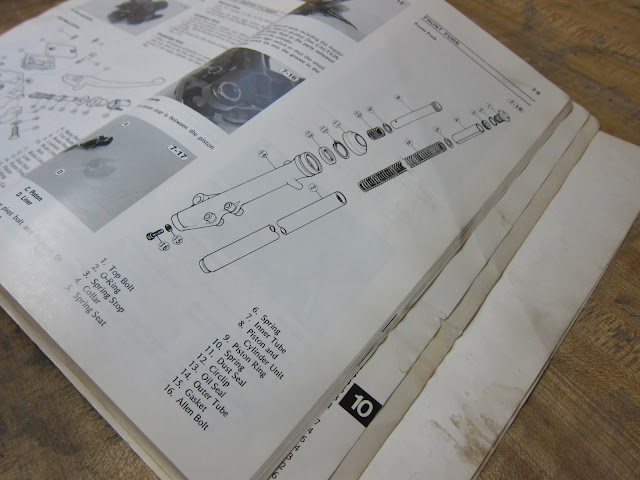 My service manual was invaluable through this whole process. 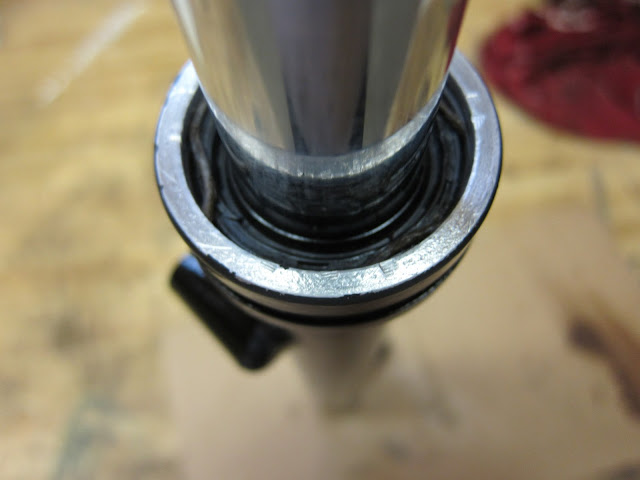 The service manual said I needed another special tool to install the oil seals.  But I just used a large flat head screw driver to gently seat them into place. 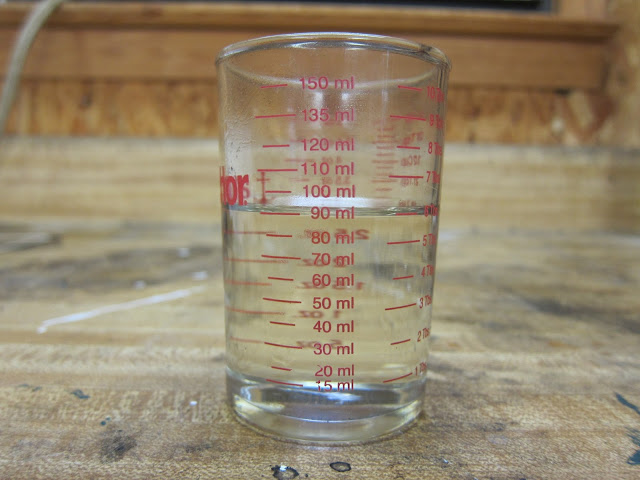 The service manual specified 83 - 91 cc of oil.  That seams like a large range.  I went with 90 for no other reason than its nice and round. 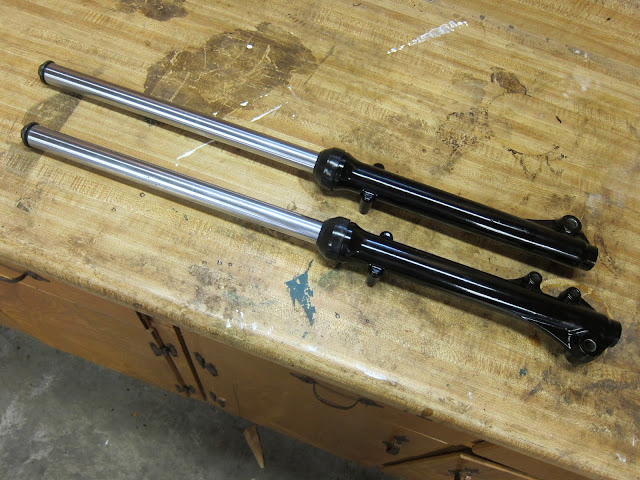